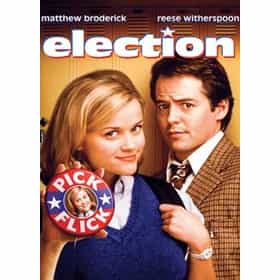 Election is a 1999 American comedy film directed and written by Alexander Payne and adapted by him and Jim Taylor from Tom Perrotta's 1998 novel of the same title. The plot revolves around a high school election, and satirizes both suburban high school life and politics. The film stars Matthew Broderick as Jim McAllister, a popular high school history, civics, and current events teacher in suburban Omaha, Nebraska, and Reese Witherspoon as Tracy Flick, around the time of the school's student body election. When Tracy qualifies to run for class president, McAllister believes she does not deserve the title, and tries his best to stop her from winning. The film is ranked #61 on Bravo's ... more on Wikipedia

The Best Quotes About Election 773 votes A list of the best election quotes and sayings, including the names of each speaker or author when available. This list is s...
The Greatest Faces Hillary Clinton Has Ever Made 2.7k votes Like holiday season, election season seems to be getting longer and longer. Years before a presidential election is schedule...

Election is ranked on...

Election is also found on...