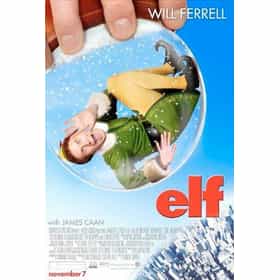 Elf is a 2003 American Christmas comedy film directed by Jon Favreau and written by David Berenbaum. It stars Will Ferrell, James Caan, Bob Newhart, Ed Asner, and Zooey Deschanel. It was released in the United States on November 7, 2003 and grossed $220,443,451 worldwide. The story is about one of Santa's elves who learns of his true identity as a human and goes to New York City to meet his biological father, spreading Christmas cheer in a world of cynics as he goes. The movie inspired the 2010 broadway musical Elf: The Musical and NBC's 2014 animated television special Elf: Buddy's Musical Christmas. ... more on Wikipedia

The Best Elf Quotes 908 votes The best Elf quotes are those hilarious one-liners as Buddy, a human raised by elves, journeys from the North Pole to New Yo...