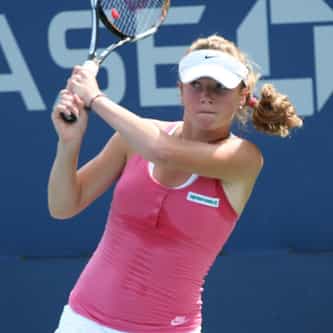 Elina Svitolina (Ukrainian: Еліна Світоліна, pronounced [ɛˈlʲinɑ sβiˈtɔlʲinɑ]; born 12 September 1994) is a Ukrainian tennis player. Having turned professional in 2010, she reached her career-high ranking of world No. 3 on 11 September 2017. Svitolina has won 13 WTA singles titles, her most significant coming at the 2018 WTA Finals, whilst winning three of five Premier 5-level tournaments in 2017, namely the Dubai Tennis Championships, the Italian Open, and the Canadian Open. At the 2015 ... more on Wikipedia

Elina Svitolina IS LISTED ON