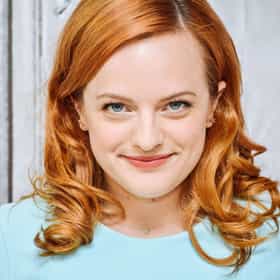 Elisabeth Singleton Moss (born July 24, 1982) is an American actor. She is known for her work in several television dramas, earning such accolades as two Primetime Emmy Awards and two Golden Globe Awards, which led Vulture to name her the "Queen of Peak TV".Moss began acting in the early 1990s and first gained recognition for playing Zoey Bartlet, the youngest daughter of President Josiah Bartlet, in the NBC political drama series The West Wing (1999–2006). Wider recognition came for playing Peggy Olson, a secretary-turned-copywriter, in the AMC period drama series Mad Men (2007–2015). She won the Golden Globe Award for Best Actress – Miniseries or Television Film for playing ... more on Wikipedia

Elisabeth Moss is ranked on...

#149 of 380 People who voted for Elisabeth Moss... also upvote Robert De Niro on The Best Actors Working Today also upvote Bryan Cranston on The Best Actors Working Today The Best American Actresses Working Today 194.9k VOTES There have been plenty of great American actresses throughout film history, but which female American actresses working toda...
#365 of 942 The Best Actresses in Film History 1.1M VOTES The best actresses ever are ranked here in this list of the best actresses in film history. These are the greatest actresses...
#262 of 505 The Best TV Actors of All Time 111k VOTES The greatest TV actors of all time. Some of these actors have been in movies, some of them are even more well known at this ...
#115 of 329 The Best Actresses Working Today 390.9k VOTES List of the best actresses working today, ranked. This list includes many of the greatest actresses in film history, but mor...
#43 of 58 The Most Influential Actors Of 2019 6.2k VOTES In 2019, some of the most influential people were those who work in Hollywood. With more films becoming more overtly politic...
#20 of 22 The Most Influential Actors Of The 2010s 3.7k VOTES With the 2010s drawing to a close, it's time to take stock of the actors who had the biggest impact over the last 10 ye...
#4 of 15 How the Cast of Mad Men Aged from the First to Last Season 2.1k VOTES Mad Men premiered on AMC on July 19, 2007. By the time the series finale aired on May 17, 2015, viewers ...
43 Amazing Commercials With Celebs Before They Got Famous 111.7k VIEWS Nothing is better than old commercials with celebrities. When you’re a young actor, you’ve got to take any gig you can - stu...
16 Actors That Started Their Careers In Adorable Children's Roles 27.4k VIEWS Often, we think of child actors as being part of a cautionary tale from the dark side of Hollywood, where young kids attaine...
20 Celebrities Who Did Ballet 87.6k VIEWS The art of ballet dancing takes years of extreme dedication and discipline to perfect. Some celebrities learned ballet for m...
EW.com's Wildly Underrated TV Actresses 11k VIEWS These are the prime-time wonder women you say deserve more attention http://www.ew.com/ew/gallery/0,,20239137,00.html

Elisabeth Moss is also found on...