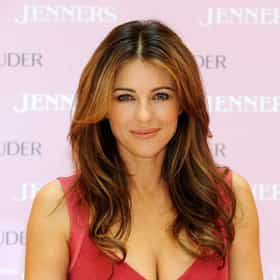 Elizabeth Jane Hurley (born 10 June 1965), more generally known as Liz Hurley, is an English businesswoman, actress, and model. She has been associated with the cosmetics company Estée Lauder since the company gave Hurley her first modelling job at the age of 29. They have featured her as a representative and model for their products, especially perfumes such as Sensuous, Intuition, and Pleasures, since 1995. Hurley owns an eponymous beachwear line.As an actress, her best-known film roles to date have been as Vanessa Kensington in Mike Myers' hit spy comedy, Austin Powers: International Man of Mystery (1997) and as the Devil in Bedazzled (2000). In 2015, Hurley began starring in ... more on Wikipedia

Elizabeth Hurley is ranked on...

Elizabeth Hurley is also found on...