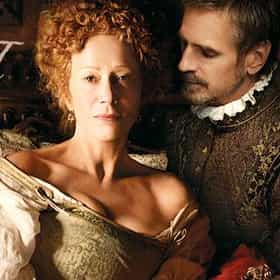 Elizabeth I is a two-part 2005 British historical drama television miniseries directed by Tom Hooper, written by Nigel Williams, and starring Helen Mirren as Elizabeth I of England. The miniseries covers approximately the last 24 years of her nearly 45-year reign. Part 1 focuses on the final years of her relationship with the Earl of Leicester, played by Jeremy Irons. Part 2 focuses on her subsequent relationship with the Earl of Essex, played by Hugh Dancy. The series originally was broadcast in the United Kingdom in two two-hour segments on Channel 4. It later aired on HBO in the United States, CBC and TMN in Canada, ATV in Hong Kong, ABC in Australia, and TVNZ Television One in New ... more on Wikipedia

Elizabeth I is ranked on...

#2 of 45 What to Watch If You Love 'The Crown' 365 VOTES The Crown is a brilliant series that looks at behind the scenes goings on within the reign of the longest-serving monarch in...
#44 of 117 The Best Historical Drama TV Shows 60.9k VOTES Learn about real-world history while you binge watch the best historical drama shows on television. Some of the greatest TV ...
#36 of 219 The Best Historical Drama Movies Of All Time, Ranked 101.2k VOTES Moviegoers rank the best historical drama movies and period pieces of all time below. So what makes a good historical drama ...
#30 of 181 The Best Miniseries in TV History 24.3k VOTES   The very best miniseries shows on television, ranked from best to worst. This list of the greatest miniseries shows...
#23 of 84 The Best Helen Mirren Movies 3.8k VOTES   List of the best Helen Mirren movies, ranked best to worst with movie trailers when available. Helen Mirren's highes...
#4 of 11 The Best Movies Directed by Tom Hooper 148 VOTES List of all movies directed by Tom Hooper ranked from best to worst with photos. Films directed by Tom Hooper are listed her...

Elizabeth I is also found on...