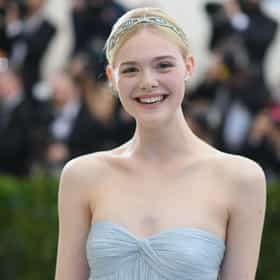 Mary Elle Fanning (born April 9, 1998) is an American actress and model. She is best known for her recent works in a number of independent films, and her portrayal as Aurora in the Maleficent film series. As the younger sister of actress Dakota Fanning, she made her film debut as the younger version of her sister's character in the drama film I Am Sam (2001). As a child actress, she appeared in a string of films including Because of Winn-Dixie (2005), Babel (2006), Phoebe in Wonderland (2008), and Somewhere (2010). Fanning's breakthrough came in 2011 with her starring role in J. J. Abrams' science-fiction film Super 8, for which her performance was praised by critics and earned her a ... more on Wikipedia

Elle Fanning is ranked on...

#222 of 568 The Most Beautiful Women Of 2019, Ranked 1.3M VOTES UPDATED: Check out the most beautiful women of 2020! This list rounds up the most beautiful women in the world in 2019. Th...
#82 of 226 The Greatest Former Child Stars 419k VOTES List of Hollywood kids: actors who grew up on the big screen and child stars you recognize working today. While there are ma...
#206 of 331 The Best Actresses Working Today 387.3k VOTES List of the best actresses working today, ranked. This list includes many of the greatest actresses in film history, but mor...
#460 of 1,026 The Most Beautiful Women In Hollywood 4.4M VOTES The most beautiful women in the world are a great mix of attractive TV actresses, singers, models, and more, ...
#122 of 181 The Most Beautiful Women Of 2018 257.5k VOTES UPDATED: Check out the hottest celebrity women of 2019! Here are the most beautiful women who won our hearts in 2018....
#213 of 479 Famous Women You'd Want to Have a Beer With 752.8k VOTES If given the opportunity to sit down for a beer with any famous female figure, which famous women would you most want to get...
#116 of 381 The Best American Actresses Working Today 193.5k VOTES There have been plenty of great American actresses throughout film history, but which female American actresses working toda...
#5 of 16 16 Big Stars Who Showed Up On 'Law and Order: SVU' Before They Were Famous 54 VOTES In early 2019, NBC renewed Law & Order: Special Victims Unit (SVU) for a record-breaking 21st season. While th...
#276 of 1,582 The Most Beautiful Women in the World 5.6M VOTES Naming the most beautiful women in the world is a difficult task because of how subjective it is. Beauty is a mixture of phy...
#667 of 3,140 People who voted for Elle Fanning... People outside of the US are 2x more likely to vote for this The Most Beautiful Celebrities Of Our Time 6.3M VOTES This list of hot celebrities is ranked by pop culture junkies worldwide, making it the best place to find the most attractiv...
#65 of 77 The Most Stylish Female Celebrities 95.3k VOTES The most stylish female celebrities manage to capture our attention with their stunning fashion choices. Whether it's a clas...
#33 of 89 Celebrities Who Should Be A-Listers 120.1k VOTES If pop culture has room enough for multiple A-list Jennifers and Chrises, it has enough time to make some space for cer...
#16 of 26 Actors Who Played Animated Disney Characters 9.1k VOTES Disney has been extremely successful in taking its most beloved animated heroes and villains and turning them into live-acti...
#8 of 68 Celebrating The Best Young Actors Of The 2010s 1.3k VOTES Some of them may not be old enough to drink - or even drive - but the top young actors of the 2010s have managed to accompli...
#25 of 45 Which Actress Do You Think Will Be The Next Meryl Streep? 18.1k VOTES With 20 Academy Awards nominations, two Best Actress Oscars, and one Best Supporting Actress Oscar, Meryl Streep u...
#47 of 128 Who Was America's Sweetheart in 2018? 130.6k VOTES There is no shortage of well-liked female celebrities in the world and they are all most definitely girlfriend material...
#7 of 12 12 Young Actors Who Are Destined To Win An Oscar 8.1k VOTES Some people are just born with talent. Hollywood is full of rising stars who are making lasting careers for themselves long ...
#34 of 48 People who voted for Elle Fanning... People in the South are 2x more likely to vote for this The Best Actresses of 2014 16k VOTES A lot of beautiful, talented, and familiar faces were back on the big screen in 2014 delivering engaging, emotional, and exc...
#371 of 415 Maxim's Nominees for the 2015 Hot 100 191.4k VOTES Here are Maxim's nominees for the 2015 hot 100. This is the issue of Maxim that gentlemen around the world look forward to m...
#8 of 19 Celebrities Who Made ASMR Videos 578 VOTES As autonomous sensory meridian response media (ASMR) becomes increasingly popular, it's no surprise there are many ASMR...
#62 of 122 Who Was America's Sweetheart in 2017? 69.3k VOTES These female celebrities are the most desirable girlfriends of America, but only one can be American's girlfriend in 2017. T...
#32 of 102 Who Is The Most Famous Actress In The World Right Now? 91k VOTES When it comes to Hollywood, the most famous actresses can change like the seasons. With so many films and TV shows coming ou...
#7 of 53 The 50+ Best Young Actresses Under 25 4.1k VOTES Who are the young actresses that will take the places of stars like Miley Cyrus and Selena Gomez, who have since graduated f...
Famous Aries Female Celebrities 65.3k VIEWS Aries tend to be charismatic people who are confident and bold in their choices - all qualities that give you an edge in you...
24 Celebs Who Love 'Game of Thrones' As Much As You Do 150.9k VIEWS They might get preferential treatment and have red carpets rolled out for them, but celebrities are just like us on Sunday n...
34 Famous ENFJs 114k VIEWS Several famous actors, musicians and journalists are believed to be ENFJs (Extraverted Intuitive Feeling Judging). ENFJs are...
Celebrities Who Turned 21 in 2019 9.9k VIEWS UPDATED: Check out the celebrities turning 21 in 2020! Several famous people celebrated their 21st birthdays in 2019....
Celebs Who Have Aced Hiding Their Secret Social Media Accounts 37.7k VIEWS For most, social media is an opportunity to have a voice when you otherwise don't. For common folk, posting something while ...

Elle Fanning is also found on...