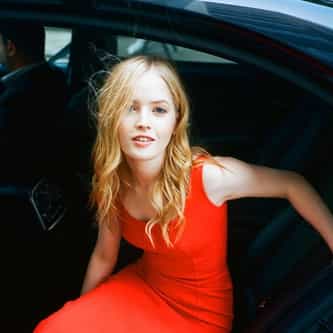 Eleanor Elizabeth "Ellie" Bamber (born 2 February 1997) is an English actress. In 2018 she won third prize at the Ian Charleson Awards for her 2017 performance as Hilde in The Lady from the Sea at the Donmar Warehouse. In 2016, she appeared in Tom Ford's Nocturnal Animals, playing the daughter of Jake Gyllenhaal and Isla Fisher's characters, in a film also starring Amy Adams. Also that year, she filmed the feature film Extracurricular Activities, in which plays a lead role ... more on Wikipedia

Ellie Bamber IS LISTED ON