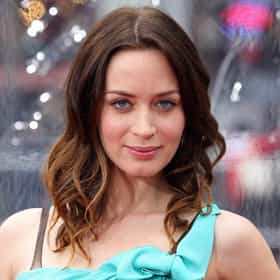 Emily Olivia Leah Blunt (born 23 February 1983) is an English-American actress. She is the recipient of numerous accolades, including a Golden Globe Award and a Screen Actors Guild Award, and has been nominated for two British Academy Film Awards. Educated at Hurtwood House in Dorking, Blunt made her acting debut in a 2001 stage production of The Royal Family. She went on to appear in the television film Boudica (2003) and portrayed Queen Catherine Howard in the miniseries Henry VIII (2003). She made her feature film debut in the 2004 drama My Summer of Love. Blunt's breakthrough came in 2006 when she starred in the television film Gideon's Daughter and the successful American comedy ... more on Wikipedia

15 Things You Didn't Know About Emily Blunt 6.7k views A bonafide A-list actress, Emily Blunt easily has one of the most diverse resumes in the business. She's played a chilly ass...
The 20+ Best Emily Blunt Movies of All Time, Ranked 3.4k votes The best Emily Blunt movies of all time prove that she’s one of the most well-rounded actresses currently active. Since the ...
Emily Blunt Loves and Hookups 2.6k views The Emily Blunt dating history may just be proof that not all the women in Hollywood are destined to a life full of rocky re...

Emily Blunt is ranked on...

Emily Blunt is also found on...