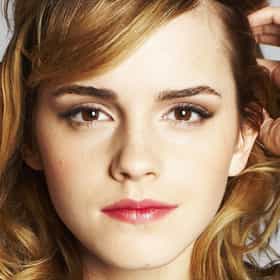 Emma Charlotte Duerre Watson (born 15 April 1990) is an English actress, model and activist. Born in Paris and brought up in Oxfordshire, Watson attended the Dragon School and trained as an actress at the Oxford branch of Stagecoach Theatre Arts. As a child artist, she rose to prominence after landing her first professional acting role as Hermione Granger in the Harry Potter film series, having acted only in school plays previously.Watson continued to work outside of the Harry Potter films, appearing in the 2007 television adaptation of the novel Ballet Shoes and lending her voice to The Tale of Despereaux (2008). Following the last Harry Potter film, she took on starring and ... more on Wikipedia

Emma Watson Loves and Hookups 31.5k views Who is Emma Watson dating? Many famous men have dated Harry Potter actress Emma Watson, and this list will give you more det...
The Best Emma Watson Movies 13.4k votes This is a list of the best Emma Watson movies, ranked best to worst - with movie trailers when available. Emma Watson blaste...
The Many Famous Friends of Emma Watson 1.4k views For many people, Emma Watson has had a presence in their lives for years. She starred as Hermione Granger in the Harry Potte...

Emma Watson is ranked on...

Emma Watson is also found on...