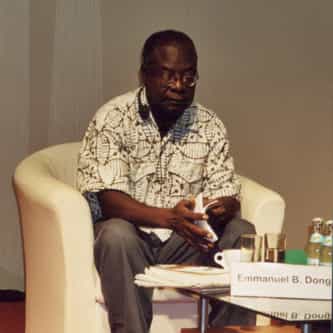 Emmanuel Boundzéki Dongala (born 1941) is a Congolese chemist and novelist. He was Richard B. Fisher Chair in Natural Sciences at Bard College at Simon's Rock until 2014.In 1997, he was dean of Marien Ngouabi University in Brazzaville when war broke out in the Republic of Congo. Bard College president Leon Botstein, who has aided a number of refugee professors, offered him a job teaching chemistry at the American college. As a chemist, his specialty is stereochemistry and asymmetric ... more on Wikipedia

Emmanuel Dongala IS LISTED ON