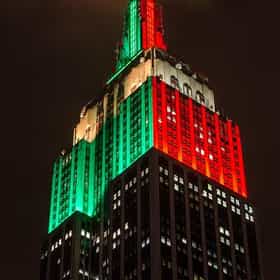 The Empire State Building is a 102-story skyscraper located in Midtown Manhattan, New York City, on Fifth Avenue between West 33rd and 34th Streets. It has a roof height of 1,250 feet, and with its antenna spire included, it stands a total of 1,454 feet high. Its name is derived from the nickname for New York, the Empire State. It stood as the world's tallest building for nearly 40 years, from its completion in early 1931 until the topping out of the original World Trade Center's North Tower in late 1970. Following the September 11 attacks in 2001, the Empire State Building was again the tallest building in New York, until One World Trade Center reached a greater height on April 30, ... more on Wikipedia

Empire State Building is ranked on...

#55 of 257 The Most Beautiful Buildings in the World 96.5k VOTES Pictures of the most beautiful buildings in the world can hardly do justice to some of the most breathtaking structures on E...
#21 of 28 The Biggest Tourist Traps on Earth 131.8k VOTES If you’re big on traveling, then you’ve undoubtedly come across a few tourist traps in your time. Whether you’ve been sucked...
#9 of 21 The Construction of the Most Iconic Landmarks on Earth 14.1k VOTES Rome wasn't built in a day, and neither were some of the most famous structures on Earth. From the Berlin Wall to the Golden...
#4 of 40 The Top Must-See Attractions in New York 1.3k VOTES List of the best things to do in NYC. These may include famous monuments, museums and parks. Stores and attractions also mak...
The 56 Tallest Buildings in the USA 13.3k VIEWS A list of the tallest buildings in the United States, with photos. These are the highest buildings in the USA, including sky...