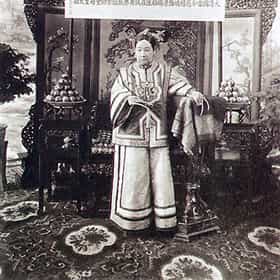 Empress Dowager Cixi (Chinese: 慈禧太后; pinyin: Cíxǐ Tàihòu; [tsʰɨ̌.ɕì tʰâi.xôu]; Manchu: Tsysi taiheo; 29 November 1835 – 15 November 1908), of the Manchu Yehe Nara clan, was a Chinese empress dowager and regent who effectively controlled the Chinese government in the late Qing dynasty for 47 years, from 1861 until her death in 1908. Selected as a concubine of the Xianfeng Emperor in her adolescence, she gave birth to a son, Zaichun, in 1856. After the Xianfeng Emperor's death in 1861, the young boy became the Tongzhi Emperor, and she became the Empress Dowager. Cixi ousted a group of regents appointed by the late emperor and assumed regency, which ... more on Wikipedia

Empress Dowager Cixi is ranked on...

Members of the Qing Dynasty Famous People Who Died in China