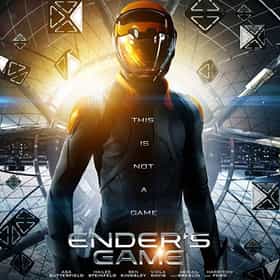 Ender's Game is a 2013 American science fiction action film based on the novel of the same name by Orson Scott Card. Written and directed by Gavin Hood, the film stars Asa Butterfield as Andrew "Ender" Wiggin, an unusually gifted child who is sent to an advanced military academy in outer space to prepare for a future alien invasion. The supporting cast includes Harrison Ford, Hailee Steinfeld, Viola Davis, Abigail Breslin, and Ben Kingsley. The film was released in Germany on October 24, 2013, followed by a release in the United Kingdom and Ireland one day later. It was released in the United States, Canada, and several other countries on November 1, 2013, and was released in ... more on Wikipedia

Ender's Game is ranked on...

Ender's Game is also found on...