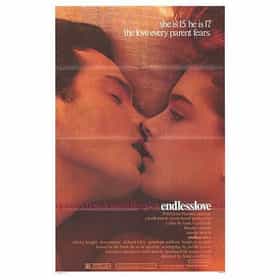 Endless Love is a 1981 romantic drama film directed by Franco Zeffirelli starring Brooke Shields, Martin Hewitt, Tom Cruise in his film debut, and James Spader in his second film role. The screenplay by Judith Rascoe was adapted from the novel by Scott Spencer. The original music score was composed by Jonathan Tunick. The film was a moderate box-office success, and its theme song, performed by Diana Ross and Lionel Richie and also called "Endless Love", became a #1 hit on the Billboard Hot 100, and was the biggest-selling single in Ross' career. Billboard magazine chose it as "The Best Duet of All Time" in 2011, 30 years after its debut. It spent 9 weeks at #1 and ... more on Wikipedia

Endless Love is ranked on...

Endless Love is also found on...