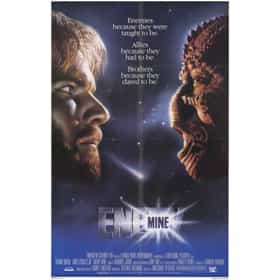 Enemy Mine is a 1985 science fiction drama film directed by Wolfgang Petersen based on the story of the same name by Barry B. Longyear. It starred Dennis Quaid and Louis Gossett, Jr. as a human and alien soldier, respectively, who become stranded together on an inhospitable planet and must overcome their mutual distrust in order to cooperate and survive. The film began production in Budapest in April 1984 under the direction of Richard Loncraine, who quickly ran into "creative differences" with producer Stephen J. Friedman and executives at 20th Century Fox; the project was shut down after a week of shooting. Wolfgang Petersen then took over as director and reshot Loncraine's ... more on Wikipedia

Enemy Mine is ranked on...

Enemy Mine is also found on...