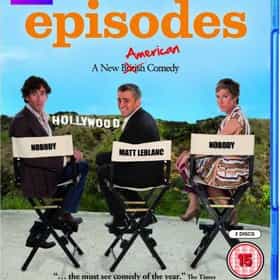 Episodes is a British/American television sitcom created by David Crane and Jeffrey Klarik and produced by Hat Trick Productions. It premiered on Showtime in the United States on 9 January 2011 at 21:30 hrs. and on BBC Two in the United Kingdom on 10 January 2011 at 22:00 hrs. The show is about a British husband-and-wife comedy writing team who travel to Hollywood to remake their successful British TV series, with disastrous results. It stars Matt LeBlanc, who previously collaborated with Crane in the series Friends, which Crane co-created. On 11 December 2013, it was announced that Showtime had renewed Episodes for a fourth season which began airing on January 11, 2015. Episodes has ... more on Wikipedia

Episodes is ranked on...

#449 of 780 The Best TV Shows to Binge Watch 1.2M VOTES Bored? Not anymore! These are the best TV shows for binge-watching. The greatest television shows in the world are ranked he...
#852 of 2,286 The Greatest TV Shows Of All Time 1.4M VOTES Choosing the best TV shows of all time means taking into account the best TV dramas, the best TV comedies, the best cartoons...
#70 of 134 People who voted for Episodes... also upvote Star Wars Franchise on The Best Epic Movies also upvote Harry Potter Franchise on The Best Epic Movies The Best of Premium Cable TV Series 187.9k VOTES Best cable series on premium cable includes some of the greatest TV shows in history. This list of premium cable original pr...
#16 of 43 The Best Showtime Shows of All Time, Ranked 12.7k VOTES At their peak, the best Showtime shows and series are on par with some of the best big screen movies and HBO original series...
#160 of 168 The TV Shows Most Loved by Hipsters 28.5k VOTES List of TV shows hipsters love, currently running and from the past. Perhaps a TV-watching hipster seems like an oxymoron; a...
#707 of 1,328 The Best Guilty Pleasure TV Shows 19.5k VOTES List of the best guilty pleasure TV shows, past and present, including sitcoms, dramas, reality shows, and game shows. These...
#9 of 15 Best 2016 Showtime Original Series 450 VOTES Deciding what’s the best Showtime Original Series of 2016 is difficult, as plenty of shows on the network have raised the ...
#14 of 61 The Best Showtime Original Shows 1.9k VOTES Showtime is an American premium paid cable television service that has produced a variety of well-known original series, kid...
#22 of 28 The Best TV Shows Ending in 2017 4.1k VOTES As wave after wave of new TV series premiere, we also say goodbye to the TV shows that are ending in 2017. While some shows ...
#60 of 74 The Funniest TV Shows of 2013 5.3k VOTES Is there anything better than a TV show that can make you laugh so hard that for a second you can’t breathe? That sort of gu...
#1 of 23 The Best Shows That Star Friends Cast Members 426 VOTES Friends: They're just like us! NBC's sitcom phenomenon ran for 10 seasons, making the Friends cast some of the most famous a...
#59 of 132 The Best 2010s Sitcoms 21.6k VOTES The 2010s were a decade blessed (or, depending on how you look at it, cursed) with the rise of Peak TV and the dawning ...
#66 of 120 The Best Dark Comedy TV Shows 34.3k VOTES Do you like your comedy a little darker? This is a list of the very best dark comedy shows on television, ranked from best t...
#28 of 37 The Best British TV Comedies On Netflix 4.1k VOTES Here are the best British comedy shows streaming now on Netflix. Whether you're looking for British sitcoms or shows with dr...
#11 of 28 The Greatest TV Shows That Parody Hollywood 533 VOTES Though you may not always realize it, Hollywood likes to take the occasional jab at itself. Whether it's a comedic look...
#58 of 338 The Best BBC Two TV Shows 2.8k VOTES List of popular BBC Two shows, ranked from best to worst. This list of the top current and cancelled BBC Two TV series inclu...

Episodes is also found on...