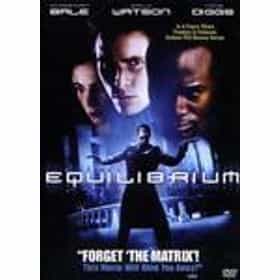 Equilibrium is a 2002 American dystopian science fiction film written and directed by Kurt Wimmer and starring Christian Bale, Emily Watson, and Taye Diggs. The film follows John Preston, an enforcement officer in a future in which both feelings and artistic expression are outlawed and citizens take daily injections of drugs to suppress their emotions. After accidentally missing a dose, Preston begins to experience emotions, which makes him question his own morality and moderate his actions while attempting to remain undetected by the suspicious society in which he lives. Ultimately, he aids a resistance movement using advanced martial arts, which he was taught by the very regime he is ... more on Wikipedia

Equilibrium is ranked on...

Equilibrium is also found on...