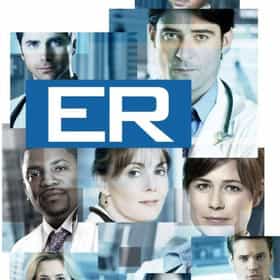 ER is an American medical drama television series created by novelist Michael Crichton that aired on NBC from September 19, 1994, to April 2, 2009. It was produced by Constant c Productions and Amblin Entertainment, in association with Warner Bros. Television. ER follows the inner life of the emergency room of fictional County General Hospital in Chicago, Illinois, and various critical issues faced by the room's physicians and staff. The show ran for 15 seasons with a total of 331 episodes, becoming the longest-running primetime medical drama in American television history. It won 23 Emmy Awards, including the 1996 Outstanding Drama Series award, and received 124 Emmy nominations, ... more on Wikipedia

The Most Important Episodes Of 'ER' 562 votes From its first episode in 1994, ER changed the way medical dramas were depicted on the small screen. For 15 seasons, ER capt...
The Best ER Episodes of All Time 4k votes List of the best ER episodes, as voted on by other fans of the series. With so many memorable episodes of the show, it's har...
The Best Seasons of ER 1.3k votes List of the best seasons of ER, listed from best to worst with pictures of DVD covers when available. Hardcore fans of the s...
People You Forgot Guest Starred on ER 13.4k views ER had a brilliant run that lasted 15 seasons and 331 total episodes from 1994-2009. The show had its fair share of successf...