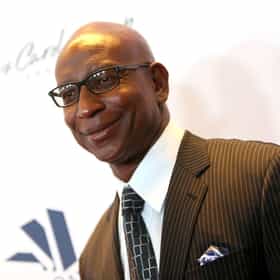 Eric Demetric Dickerson (born September 2, 1960) is an American former football running back who played in the National Football League (NFL) for eleven seasons. Dickerson played college football for the SMU Mustangs of Southern Methodist University and was recognized as an All-American. He was selected in the first round of the 1983 NFL Draft and played professionally for the Los Angeles Rams, Indianapolis Colts, Los Angeles Raiders, and Atlanta Falcons of the NFL. During his NFL career, he rushed for over 13,000 yards. He holds the NFL's single-season rushing record with 2,105 yards, set in 1984. Dickerson was inducted into the Pro Football Hall of Fame in 1999. He wore prescription ... more on Wikipedia

Eric Dickerson is ranked on...

Eric Dickerson is also found on...