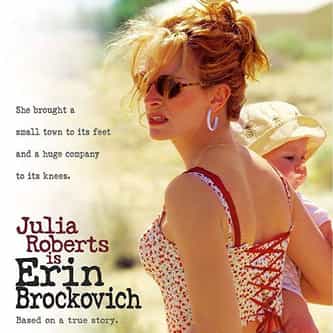 Tagline
She brought a small town to its feet and a huge corporation to its knees.

Erin Brockovich is a 2000 biographical film directed by Steven Soderbergh and written by Susannah Grant. The film is a dramatization of the true story of Erin Brockovich, portrayed by Julia Roberts, who fought against the energy corporation Pacific Gas and Electric Company. The film was a box office success, and critical reaction was positive. Roberts won the Academy Award, Golden Globe, Screen Actors' Guild Award and BAFTA for Best Actress. The film itself was also nominated for Best ... more on Wikipedia

Erin Brockovich IS LISTED ON