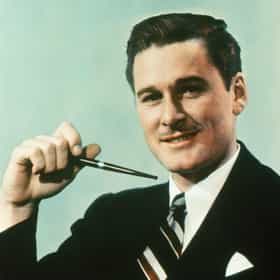 Errol Leslie Thomson Flynn (20 June 1909 – 14 October 1959) was an Australian-born American actor during the Golden Age of Hollywood. Considered the natural successor to Douglas Fairbanks, he achieved worldwide fame for his romantic swashbuckler roles in Hollywood films, as well as frequent partnerships with Olivia de Havilland. He was best known for his role as Robin Hood in The Adventures of Robin Hood (1938); his portrayal of the character was named by the American Film Institute as the 18th-greatest hero in American film history. His other famous roles included the eponymous lead in Captain Blood (1935), Major Geoffrey Vickers in The Charge of the Light Brigade (1936), as well as ... more on Wikipedia

Errol Flynn is ranked on...

#364 of 427 The Hottest Male Celebrities of All Time 3.5M VOTES You love your boyfriend (husband? Lucky you!), but then there are these hot celebrity men. You see them and then you maybe f...
#83 of 149 The All-Time Greatest Action Stars 312.9k VOTES Who are the all-time greatest action stars? This list includes some of the biggest names in movie history, and each actor or...
#382 of 532 Famous Men You'd Want to Have a Beer With 1.8M VOTES If given the opportunity to sit down for a beer with any famous male figure, which famous men would you most want to get a d...
#132 of 312 Which Actor Would You Bring Back for One Final Movie? 189.9k VOTES We asked, you answered. Fans of the Ranker Facebook page chose which dead actors they’d like to bring back to life for just ...
#9 of 20 Old Hollywood Stars Who Would Be Perfect Casting For Modern Superheroes 4.5k VOTES What if superhero movies were all the rage during the Golden Age of Hollywood? Which old Hollywood actresses and actors woul...
Cool Old Photos of Celebrities with Their Cats 511.7k VIEWS Oscars, Grammys, Pulitzers, Nobel Prizes... What do these prestigious awards have in common? Cats don't care about them. At ...
Famous Irish Americans 50.8k VIEWS This list includes famous Irish Americans of both today and throughout history, hot pics included! (Famous Irish people take...
35 Famous Movie Stars of the 1930s 115.5k VIEWS Lights, camera, action! These famous movie stars were the very definition of glitz and glamour in in the 1930s. Despite the ...
Filmsite's Great Actors (Male) Who Have Not Won An Oscar 10.3k VIEWS Filmsite's list of the greatest actors to never win an Oscar. These actors have done great work in the industry but have n...
Golden Apple Sour Apple Award Winners 3k VIEWS From the 1940s until 2001, the Sour Apple Award was presented by the Hollywood Women's Press Club to recognize male and fema...
#7 of 20 The Best Actors Who Played (Or Voiced) Robin Hood 101 VOTES As one of the most legendary medieval heroes of all time, there have been tons of great Robin Hoods over the years, but whic...

Errol Flynn is also found on...