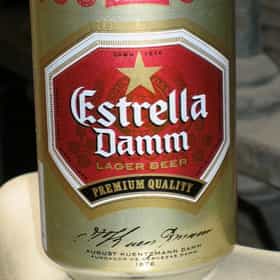 Estrella Damm is a lager beer, brewed in Barcelona, Spain. It has existed since 1876, when August Küntzmann Damm founded his brewery in Barcelona, and is the flagship beer of S.A. Damm, a prominent brewery in the city. The brand is the oldest in Spain and the name Estrella means "star" in both Catalan and Spanish. Estrella Damm is available in many countries, including Australia, Brazil, Peru, Bulgaria, Canada, Cyprus, Croatia, Greece, Ukraine, Norway, Poland, Portugal, Sweden, Taiwan, Georgia, Honduras, South Korea, and the UK in a 4.6% version. In the United States, it is available through United States Beverage, LLC. Despite its name, Estrella Damm should not be ... more on Wikipedia

Estrella Damm is ranked on...

#3 of 18 The Top Beers from Spain 2k VOTES What's the best Spanish beer? This list of the most well-known, widely produced, and popular beers from Spain has them all! ...

Estrella Damm is also found on...