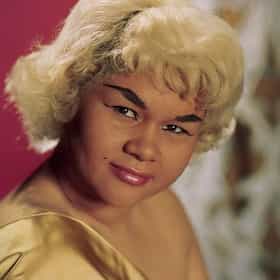 Etta James (born Jamesetta Hawkins; January 25, 1938 – January 20, 2012) was an American singer who performed in various genres, including blues, R&B, soul, rock and roll, jazz and gospel. Starting her career in 1954, she gained fame with hits such as "The Wallflower", "At Last", "Tell Mama", "Something's Got a Hold on Me", and "I'd Rather Go Blind". She faced a number of personal problems, including heroin addiction, severe physical abuse, and incarceration, before making a musical comeback in the late 1980s with the album Seven Year Itch.James's powerful, deep, earthy voice bridged the gap between rhythm and blues and rock and ... more on Wikipedia

The Best Etta James Albums of All Time 279 votes Etta James is one of the best jazz singers of all time, as well as one of the greatest female vocalists. Here, you'll find a...

Etta James is ranked on...

#418 of 2,187 People who voted for Etta James... People in the South are 2x more likely to vote for this The Greatest Musical Artists of All Time 13.4M VOTES When VH1 polled fellow artists to name the greatest artists of all time, it seemed like a good idea---but in reality, the li...
#102 of 705 People who voted for Etta James... People on the West Coast are 2x more likely to vote for this The Best Rock Vocalists 1.2M VOTES The best rock vocalists of all time are the frontmen of our favorite rock bands or those solo artists whose voices are some ...
#19 of 969 The Best Female Vocalists Ever 1.8M VOTES List of the best female singers of all time, ranked by music fans and casual critics like you. Who are the greatest female v...
#162 of 278 Rank the Rock N Roll Hall of Fame Inductees 306.2k VOTES A complete list of bands and artists inducted into the Rock and Roll Hall of Fame, ranked in order of preference by music fa...
#297 of 469 Famous Role Models We'd Like to Meet In Person 539k VOTES These are the famous folks it would be most exciting to meet in person, as ranked by the wisdom of the crowd. Some of the be...
#149 of 279 The Top Pop Artists of the 1960s 92.1k VOTES List of the best pop artists of the 60s, ranked. The 1960s may very well be the best decade for music in the rock era. Music...
#62 of 519 Which Artist Would You Bring Back From The Dead To Write One More Song? 123.6k VOTES Many of the world's greatest musicians remain highly respected even in death. The world often mourns the loss of t...
#47 of 201 The Female Singer You Most Wish You Could Sound Like 141.6k VOTES What female singer's voice would you most like to have? This is a different question than "who has the best female voic...
#67 of 140 Bygone Musicians You Most Want to See Perform as Holograms 77.3k VOTES A hologram wish-list for dead musicians. At the Coachella Music Festival in April of 2012, a holographic image of the deceas...
#12 of 258 People who voted for Etta James... People over 50 are 3x more likely to vote for this The Best Blues Artists of All Time 106.5k VOTES Whether you like Muddy Waters, Robert Johnson, or that bluesy broad Etta James, there's now denying they're all some of the ...
#27 of 224 The Best Musical Artists From California 5.4k VOTES Here are the best artists and bands from California. From the San Francisco Bay to the coast of San Diego, there is a lot to...
Rolling Stone Magazine's 100 Greatest Vocalists of All Time 399.5k VIEWS Rolling Stone's list of the 100 best singers of all-time includes some of the greatest vocalists in the history of recording...
Celebrities You Didn't Know Use Stage Names 1.8M VIEWS List of celebrities with stage names, loosely ranked according to fame and popularity. It's tough to break into show busin...
#12 of 160 The Best Soul Singers/Groups of All Time 35.8k VOTES Combining elements of jazz, R&B, and traditional gospel music, soul is a genre that became popular in the 1950s and hasn...
Famous People Whose Last Name Is James 20.6k VIEWS Being a fairly common name, it's no surprise there are a lot of famous people with the last name James. Do you recognize all...
#2 of 53 The Greatest Black Female Soul Singers 8.4k VOTES Their songs are iconic. Their voices are unforgettable. These are the greatest black female soul singers of all time, as ran...
35+ Celebrities Who Had Weight Loss Surgery 126.9k VIEWS America has an interesting fascination with celebrity. We build up certain people to be larger than life and then follow the...

Etta James is also found on...