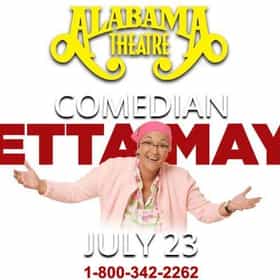 Etta May is an American comedian. She was the winner of the American Comedy Awards Stand-Up Comic of the Year, and has appeared on MTV, Oprah, Comic Strip Live, and as a guest commentator on CBS Sunday Morning. In 1999, promoted by Scott Sherman of Atlantic Entertainment Group, Etta Mae appeared at the Philadelphia LGBT Pride Fest, her first LGBT event, with comic Thea Vidale. Both were honored by the city's mayor, who officially named the day simultaneously "Thea Vidale Day" & "Etta May Day". ... more on Wikipedia

Etta May is ranked on...

Etta May is also found on...