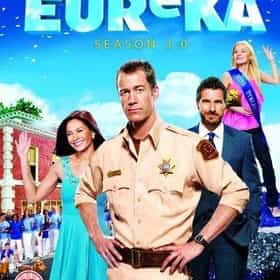 Eureka was an American science fiction television series that premiered on Syfy on July 18, 2006. The fifth and final season ended on July 16, 2012. The show was set in a fictional town in Oregon called Eureka. Inhabited almost entirely by scientific geniuses, most residents of Eureka work for Global Dynamics – an advanced research facility responsible for the development of nearly all major technological breakthroughs since its inception. Each episode featured a mysterious accidental or intentional misuse of technology, which the town sheriff, Jack Carter, solved with the help of town scientists. Each season also featured a larger story arc that concerned a particular major event or ... more on Wikipedia

Eureka is ranked on...

#207 of 780 The Best TV Shows to Binge Watch 1.2M VOTES Bored? Not anymore! These are the best TV shows for binge-watching. The greatest television shows in the world are ranked he...
#20 of 321 People who voted for Eureka... also upvote Star Wars Franchise on The Best Movies of All Time also upvote Harry Potter Franchise on The Most Rewatchable Movies The Best Sci Fi Television Series of All Time 929.5k VOTES Here is a list of the best sci-fi shows and best sci-fi series of all time, as ranked by hundreds of Ranker voters. Thi...
#4 of 75 The Best Syfy Original Shows 17.2k VOTES The Syfy channel (originally called the Sci-Fi Channel) is a cable and satellite TV station that is owned by NBCUniversal Ca...
#508 of 2,286 The Greatest TV Shows Of All Time 1.4M VOTES Choosing the best TV shows of all time means taking into account the best TV dramas, the best TV comedies, the best cartoons...
#51 of 92 The Best Dramedy TV Series 14.5k VOTES Some shows are clearly dramas or sitcoms. Clearly. Because those are two genres that exist. Everyone agrees that they exist....
#59 of 62 The Best Crime Fighting Duo TV Series 19.7k VOTES Sometimes the best TV crime series are is based on a duo of great crime fighting duos rather than an ensemble cast or one he...
#83 of 158 Shows with the Best Freakin' Series Finales of All Time 262.6k VOTES This list of the best series finales in television is a somber reminder that no matter how much you love a TV character or a...
#201 of 385 The Best TV Shows of The Last 20 Years 1.5M VOTES This best TV show list represents the combined opinions of thousands of TV fans. Anyone can vote on this list of the best TV...
#192 of 400 TV Shows That Only Smart People Appreciate 1.2M VOTES Since about the early 2000s, TV audiences have been blessed with what many experts call The Golden Age of Television. In oth...
#52 of 62 The Best Science Fiction Franchises of All Time 34.3k VOTES Science fiction is a very popular genre in books, films, video games, and television shows. Some of the biggest grossing mov...
#24 of 45 What to Watch If You Love 'Doctor Who' 816 VOTES Doctor Who is not just a television show, it's an institution. With more than 50 years of amazing episodes, the Doctor ...
#7 of 14 Underrated Sci-Fi TV Shows That Are Legitimately Funny 18 VOTES If you're a fan of science fiction, it's possible you've seen every episode of your most beloved sci-fi shows so many t...
#40 of 119 The Best TV Shows That Never Got a Real Finale 64.6k VOTES List of the best TV shows that never got a real finale, ranked by how much fans miss them. The greatest cancelled television...
#193 of 476 The Best Television Shows of the 2000s 144k VOTES Some great TV shows came out of the 2000s, while some have even lived on. Here's a list of the best shows that aired from 20...
#21 of 56 The Most Exciting Sci-Fi Series Ever Made 2.8k VOTES The top sci-fi TV shows ever aired are some of the most exciting and thought-provoking to watch on television, but which is ...
#55 of 272 The Greatest Supernatural Shows of All Time 453.7k VOTES The very best supernatural shows on television, ranked from best to worst. Popular supernatural TV shows have been a staple ...
#10 of 46 The Greatest Sci-Fi Shows of The 2010s 13.3k VOTES These are the best 2010s sci-i shows, ranked from best to worst by user votes. There are good 2010s science fiction series t...
#1 of 68 The Best Syfy TV Shows 41.1k VOTES Do you believe in aliens, ghosts, and the supernatural? Then the Syfy channel is for you! This list of the top current and c...
#6 of 37 The Best 2000s Sci-Fi Shows 4.6k VOTES These are the best 2000s Sci Fi shows, ranked from best to worst by user votes. Some good 2000s sci-fi series were set centu...
#42 of 102 The Best Comedy-Drama TV Shows Ever 19.5k VOTES The best comedy-drama TV shows, also known as dramadies, provide not only laughs but also heartfelt storylines. They have be...
#23 of 40 The Best TV Shows Set in Space, Ranked 7.3k VOTES The outer galaxy has fascinated television viewers for decades. The best space TV shows feature out-of-this-world storylines...
#27 of 32 The Greatest TV Shows About Technology 870 VOTES The one thing that remains ubiquitous in all our lives is technology, and you might even say the same for shows about techno...
#10 of 46 The Best Sci-Fi Shows on Amazon Prime 3k VOTES Amazon Prime is home to an extensive list of TV shows, and where there's great TV, there's great sci-fi shows. Fro...

Eureka is also found on...