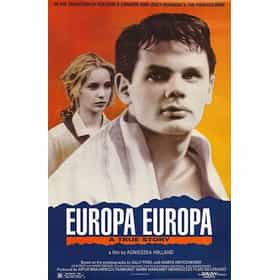 Europa Europa is a 1990 film directed by Agnieszka Holland. Its original German title is Hitlerjunge Salomon, i.e. "Hitler Youth Salomon". It is based on the 1989 autobiography of Solomon Perel, a German Jewish boy who escaped the Holocaust by masquerading not just as a non-Jew, but as an elite "Aryan" German. The film stars Marco Hofschneider as Perel; Perel appears briefly as himself in the finale. The film is an international co-production between CCC Film and companies in France and Poland. ... more on Wikipedia

Europa Europa is ranked on...

Europa Europa is also found on...