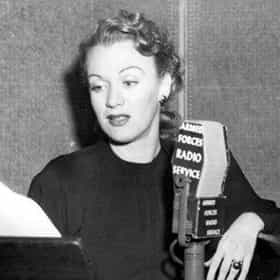 Eve Arden (born Eunice Mary Quedens, April 30, 1908 – November 12, 1990) was an American film, radio, stage, and television actress, and comedienne. She performed in leading and supporting roles for nearly six decades. Beginning her film career in 1929 and on Broadway in the early 1930s, Arden's first major role was in the RKO Radio Pictures drama Stage Door (1937) opposite Katharine Hepburn, followed by roles in the comedies Having Wonderful Time (1938) and the Marx Brothers' At the Circus (1939). Arden would go on to earn an Academy Award nomination for Best Supporting Actress for her role in Mildred Pierce (1945). In the latter part of her career, she played the sardonic but ... more on Wikipedia

Eve Arden is ranked on...

#240 of 940 People who voted for Eve Arden... People over 50 are 2x more likely to vote for this The Best Actresses in Film History 1.1M VOTES The best actresses ever are ranked here in this list of the best actresses in film history. These are the greatest actresses...
#60 of 161 These Big-Name Celebs Have Been Hiding Their Real Names 99.8k VOTES List of real names of celebrities, including actors, singers, wrestlers, and even politicians. Many actors and actresses use...
The Locations of All Hollywood Walk of Fame Stars 419.7k VIEWS A list of stars on the Hollywood Walk of Fame, with photos. This list includes all television and movie stars. Acquiring a s...
What Lucille Ball’s Colleagues Said About Working With Her 7.3k VIEWS Fans of Lucy Ricardo may remember her as a zany television housewife fond of creating misunderstandings on I Love Lucy, but&...

Eve Arden is also found on...