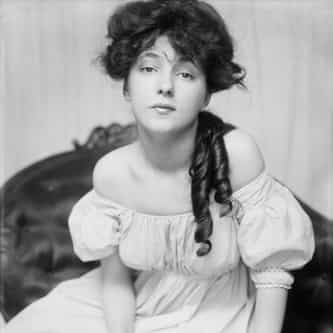 Evelyn Nesbit (born Florence Mary Nesbit; December 25, 1884 or 1885 – January 17, 1967) was an American artists' model, chorus girl, and actress. In the early part of the 20th century, Nesbit's figure and face appeared frequently in mass circulation newspapers and magazine advertisements, on souvenir items, and in calendars, making her a celebrity. Her career began in her early teens in Philadelphia and continued in New York, where she posed for a cadre of respected artists of the era, ... more on Wikipedia

Evelyn Nesbit IS LISTED ON