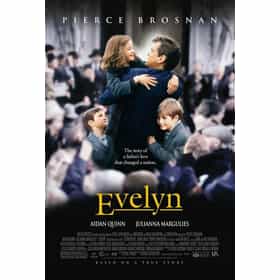 Evelyn is a 2002 drama film, loosely based on the true story of Desmond Doyle and his fight in the Irish courts to be reunited with his children. The film stars Sophie Vavasseur in the title role, Pierce Brosnan as her father and Aidan Quinn, Julianna Margulies, Stephen Rea and Alan Bates as supporters to Doyle's case. The film had a limited release in the United States, starting on December 13, 2002 and was later followed by the United Kingdom release on March 21, 2003. The film was produced by, with others, Brosnan's own production company, Irish DreamTime. It opened to positive reviews. ... more on Wikipedia

Evelyn is ranked on...

Evelyn is also found on...