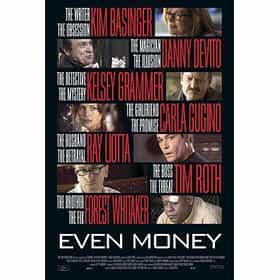 Even Money is a 2006 American crime film. The story concerns three strangers who are addicted to gambling and how their lives come to be intertwined. They are a novelist who struggles to write her follow-up book, a former stage magician and an older brother of a college basketball star. The film was directed by Mark Rydell, and stars Forest Whitaker, Nick Cannon, Kim Basinger, Danny DeVito, Kelsey Grammer, Tim Roth, Carla Gugino, Jay Mohr and Ray Liotta. It was released on May 18, 2007 in theaters. ... more on Wikipedia

Even Money is ranked on...

Even Money is also found on...