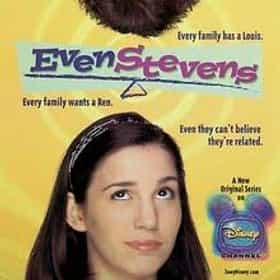 Even Stevens is an American comedy television series that aired on Disney Channel with a total of three seasons and 65 episodes from June 17, 2000, to June 2, 2003. It follows the life of the Stevenses, a family living in suburban Sacramento, California, mainly focusing on the clashing personalities of its two younger siblings, Ren and Louis. The series was produced by Brookwell McNamara Entertainment and Fireworks Entertainment. It is often cited as launching Shia LaBeouf's breakout career as an actor. The show also features fast motion photography, which it employs in every episode. The feature-length Disney Channel Original Movie based on the series, The Even Stevens Movie, ... more on Wikipedia

lists about Even Stevens

Strange (And Often Dark) Behind The Scenes Secrets From Even Stevens 38k views Even Stevens is such an iconic millennial touchstone that you'd be forgiven for thinking it ran for more than three years. A...
Where Are They Now? The Cast Of Even Stevens 70.5k views For three seasons in the early 2000s, the Stevens family kept many of us laughing and became an indelible part of our earlie...

Even Stevens is ranked on...

#821 of 1,176 The Greatest TV Shows Of All Time 1.4M VOTES Choosing the best TV shows of all time means taking into account the best TV dramas, the best TV comedies, the best cartoons...
#39 of 187 The Best TV Shows You Can Watch On Disney+ 12.9k VOTES Launched in the fall of 2019, Disney+ offered new shows based on Disney, Marvel, and Star Wars properties alongside old favo...
#245 of 296 The Greatest Sitcoms in Television History 936.7k VOTES Best sitcoms ever to air on television includes some of the greatest sitcoms of all time as ranked by fans of TV. What's the...
#10 of 74 The Best Shows You Watched After School in the 2000s 10.6k VOTES The 2000s was a decade of great technological achievements. During this time, we left behind the simpler comforts of the '90...
#270 of 1,328 The Best Guilty Pleasure TV Shows 19.5k VOTES List of the best guilty pleasure TV shows, past and present, including sitcoms, dramas, reality shows, and game shows. These...
#14 of 20 The Best Disney Channel Shows of the 2000s 4.5k VOTES A lot of millennials think the 1990s had all of the great TV shows. However, that quality did not dip in the slightest on Th...
#19 of 87 The Best Teen Sitcoms of All Time 24.1k VOTES The best teen sitcoms serve not only as a reflection of teen life but also an educational tool. They’re filled with moral an...
#23 of 104 The Best Teen Comedy Series Ever Made 3.3k VOTES Comedy series for teens have to walk a delicate line, not being so childish they’re off-putting to their audience, but also ...
#18 of 51 The Best Family Channel TV Shows 3.6k VOTES List of popular Family Channel shows, ranked from best to worst. This list of the top current and cancelled Family Channel T...
#11 of 107 People who voted for Even Stevens... also upvote Halloweentown on The Best Disney Channel Original Movies of All Time also upvote Smart House on The Best Disney Channel Original Movies of All Time The Best Disney Channel TV Shows 197.9k VOTES This list of the top current and cancelled Disney Channel TV series includes the date when each show first aired, as well as...
#16 of 42 The Best 2000s Teen Shows 16k VOTES These are the best 2000s teen shows, ranked from best to worst by young adult TV show fans all over the world. Some of these...
#25 of 55 The Best Kids Live Action TV Shows Ever Made 1.8k VOTES Chances are if you grew up sometime in the latter half of the 20th century, your childhood was filled with amazing chil...
#43 of 61 The Funniest Kids Shows Ever Made 3.3k VOTES Kids love to laugh. While their parents may try to get them to watch educational programming, kids just want to change the c...