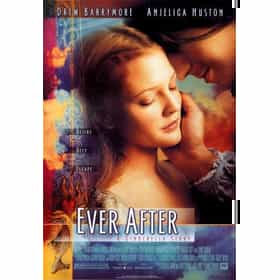 Ever After is a 1998 American romantic comedy-drama film inspired by the fairy tale Cinderella, directed by Andy Tennant and starring Drew Barrymore, Anjelica Huston, and Dougray Scott. The screenplay is written by Tennant, Susannah Grant, and Rick Parks. The original music score is composed by George Fenton. The film's closing theme song "Put Your Arms Around Me" is performed by the rock band Texas. The usual pantomime and comic/supernatural elements are removed and the story is instead treated as historical fiction, set in Renaissance-era France. It is often seen as a modern, post-feminism interpretation of the Cinderella myth. ... more on Wikipedia

Ever After is ranked on...

Ever After is also found on...

Romance Movies and Films List of All Movies Released in 1998