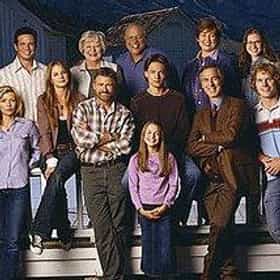 Everwood is an American drama television series that initially aired in the United States on The WB. The series is set in the fictional small town of Everwood, Colorado, and was filmed in Ogden, South Salt Lake, Draper, Utah, and Park City, Utah except the series pilot which was filmed in Canmore, Alberta, Denver, Colorado and Calgary. It is primarily a drama with some comedic moments. Everwood ran for four seasons from 2002 to 2006. It was not renewed for future production and did not return when The WB and UPN merged to form The CW. ... more on Wikipedia

Everwood is ranked on...

#66 of 74 The Best Shows You Watched After School in the 2000s 10.7k VOTES The 2000s was a decade of great technological achievements. During this time, we left behind the simpler comforts of the '90...
#88 of 93 The All-Time Best Primetime Soap Operas 8.7k VOTES Soap operas have been a staple of the television world since they first gained traction in the 1950s. However, it wasn’t unt...
#254 of 476 The Best Television Shows of the 2000s 144k VOTES Some great TV shows came out of the 2000s, while some have even lived on. Here's a list of the best shows that aired from 20...
#18 of 80 The Best WB Television Network TV Shows/Programs 2.9k VOTES For many of us, shows on the WB were responsible for informing our early years, teaching us that love is complicated, your f...
#40 of 68 Good TV Shows for Teens 1.2k VOTES Finding the best shows for teenagers to watch can be tricky. Not all TV shows starring teens (or actors playing teens) are n...
#15 of 58 The Best Hulu TV Shows 2.1k VOTES List of popular Hulu shows, ranked from best to worst. This list of the top Hulu TV series, both current and canceled seri...
#36 of 42 The Best 2000s Teen Shows 16.1k VOTES These are the best 2000s teen shows, ranked from best to worst by young adult TV show fans all over the world. Some of these...
#6 of 43 The Greatest TV Shows About Small Towns 1.5k VOTES Not everyone comes from one or lives in a small town, but TV shows about small towns permeate our networks. If you think abo...
#38 of 40 Good TV Shows for 13 Year Olds 2.9k VOTES Picking out what is a good TV show for 13 year olds is particularly tricky. There often feels like a big gap between "k...
#22 of 37 The Best 2000s Medical TV Shows 494 VOTES These are the best 2000s medical TV shows, ranked from best to worst by your votes. Since television became popular in Ameri...

Everwood is also found on...