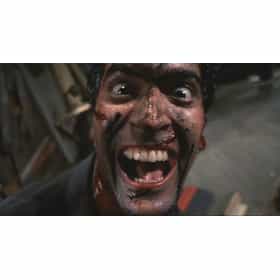 Evil Dead II is a 1987 American horror comedy film directed by Sam Raimi and a parody sequel to the 1981 film The Evil Dead. The film was written by Raimi and Scott Spiegel, produced by Robert Tapert, and stars Bruce Campbell as Ash Williams. Filming took place in Michigan and North Carolina in 1986 and the film was released in the United States on March 13, 1987. It was a minor box office success, achieving just under $6 million. It positive reviews in which critics praised Raimi's direction and Campbell's role as the protagonist. Like the original, Evil Dead II has accumulated a cult following. The film was followed by a third installment in the Evil Dead series, Army of Darkness. ... more on Wikipedia

Evil Dead II is ranked on...

#31 of 799 The Best Horror Movies Of All Time 1M VOTES Horror movies, ranked by adrenaline junkies worldwide. Anyone can vote on this CrowdRanked list, and can even add your own f...
#738 of 6,106 The Best Movies Of All Time 5.6M VOTES These are the best movies of all time, ranked by movie experts and film fans alike. What are the greatest movies in cinema h...
#660 of 1,007 The All-Time Greatest Comedy Films 424.7k VOTES The best comedy movies of all time are listed here, in one convenient list to be voted on and ranked by true fans. Thes...
#119 of 571 People who voted for Evil Dead II... People on the West Coast are 3x more likely to vote for this The Greatest Movies Of The 1980s, Ranked 515.1k VOTES Since it was one of the greatest decades for film, here's a list of the best movies of the 80s. These are the most popu...
#7 of 117 The Best Zombie Comedies 2.2k VOTES This list of the best zombie comedies proves that there's plenty of laughs available even in the most rotting, apocalyptic l...
#49 of 116 The Scariest Giant Monster Movies 32.5k VOTES List of the scariest giant monster movies of all time, as ranked by monster movie aficionados and film critics. Ever since 1...
#9 of 18 The Dumbest Fictional Weapons Of All Time 31k VOTES When you go to the movies it’s easy to get wrapped up in the glitz and glamour of it all, especially when the movie is a rip...
#14 of 52 The Best Horror Movies About Cults and Conspiracies 3.6k VOTES As you're reading through this list of the best horror movies about cults, please don't drink the Kool-Aid. This list ranks ...
#2 of 99 The Best Horror Movie Sequels 28.2k VOTES Does your favorite horror film keep the frights coming with an awesome sequel? Browse through this list of the best horror m...
#17 of 27 The Nastiest Decapitations in Horror Movies 3.1k VOTES Decapitation is an age-old staple of the horror genre. It's is a quick, visceral, sensationalist way to kill a character tha...
#23 of 137 The Goriest Movies Ever Made 271.3k VOTES Are you a fan of gory movies? If so, you’ve come to the perfect place to find a new favorite gory movie. Go ahead and browse...
#18 of 151 The Best Zombie Movies of All Time 172.8k VOTES List of the best zombie movies ever, including popular blockbusters like Zombieland, 28 Days Later, and Dawn of the Dea...
#8 of 33 The Scariest Cabin Horror Movies 1.4k VOTES Cabins are creepy enough as it is with their proximity to hungry bears and biting bugs, but add an axe-wielding murderer to ...
#2 of 10 Odd And Creepy Things In The Backgrounds of Movies You've Never Noticed 3.6k VOTES A well-crafted and visionary film is essentially a living entity with infinitely varying facets. For every single shot in a ...
#12 of 43 These Hand-Painted Movie Posters From Ghana Are Just Nuts 544 VOTES The collection of crazy hand-painted movie posters from Ghana on this list provides a microcosm of how local cultures a...
#8 of 27 The Greatest Horror Parody Movies, Ranked 2k VOTES Horror parody movies find the funny in the often ridiculous scenarios of classic scary movies. The top slasher parodies feat...
#19 of 35 Rainy Day Horror Movies You Can Watch Again And Again 4.3k VOTES Halloween is a time for parties, pumpkins, and scares galore. While there are fun rituals that accompany the holiday, includ...
#77 of 78 The 25+ Most Disappointing Movie Sequels That Let Us All Down 8k VOTES You waited oh so patiently for your favorite movie's anticipated sequel, but then... Oh god. What a mess. This list of the m...
#6 of 181 The Best Comedy Horror Movies, Ranked 30.6k VOTES Funny horror movies! This is a list list of some of the best comedy horror movies ever made, or horror comedies. Either way ...
#56 of 207 The Best Classic Horror Movies 83.6k VOTES If you’re a true horror film enthusiast then you’ll recognize these famous directors and the movies that earned them worldwi...
#58 of 502 People who voted for Evil Dead II... Men are 2x more likely to vote for this The Scariest Movies Ever Made 546.9k VOTES These are the all-time scariest movies ever made. Many of these movies have become part of the pop culture lexicon due to th...
#10 of 62 The Best Horror Movies Set in the Woods 16.2k VOTES Do the woods scare you? Do they bring you an uneasy feeling? Many horror movies have been set in the woods because forests a...
#179 of 234 The Best R-Rated Horror Movies 8.4k VOTES List of R-Rated horror movies, ranked from best to worst with movie trailers when available. This list takes the best R-Rate...
#52 of 75 The Best Horror Movies for Date Night 19.5k VOTES Are you hoping for the perfect horror movie pick for a night of cuddling? Horror movies can sometimes make the best choice f...
#4 of 24 The Best 80s Zombie Movies 558 VOTES Before you were getting scared in HD, there were zombie movies from the 80s that relied on other tactics to frighten you. As...
#79 of 197 The Best R-Rated Comedies 10.9k VOTES List of R-Rated comedies, ranked from best to worst with movie trailers when available. These comedies are all R-Rated, so i...
#5 of 30 The Best 80s Monster Movies 1.9k VOTES For your enjoyment, here is a list of the best 80s monster movies. Monster movies were less prevalent in the 80s compared to...
#5 of 31 The Best Horror Movies To Watch Stoned 972 VOTES Ever been high on Halloween and wondered what horror films to watch stoned? Or maybe, while under the influence, you simply ...
#1 of 21 The Best Movies Directed by Sam Raimi 1.1k VOTES List of all movies directed by Sam Raimi ranked from best to worst with photos. Films directed by Sam Raimi are listed here ...
Entertainment Weekly's Top 50 Cult Movies 18.7k VIEWS Entertainment Weekly's list of the fifty best cult movies of all time. There's a reason why these are the best cult clas...