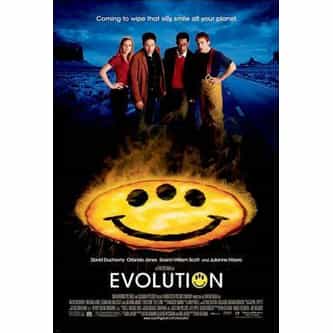 Tagline
Coming to wipe that silly smile off your planet.
Have a nice end of the world.

Evolution is a 2001 American science fiction comedy film directed by Ivan Reitman and starring David Duchovny, Orlando Jones, Seann William Scott, Julianne Moore and Ted Levine. In the United States, it was released by DreamWorks and internationally, by Columbia Pictures. The plot of the film follows college professor Ira Kane and geologist Harry Block who investigate a meteor in Arizona. They discover that the meteor is harboring extraterrestrial life which is evolving very quickly into ... more on Wikipedia

Evolution IS LISTED ON