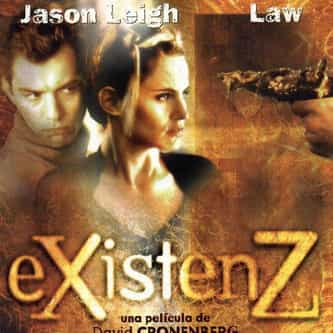 Tagline
Connect Compete Collide.
Play Or Be Played.
Play it. Live it. Kill for it.

Existenz is a 1999 Canadian science fiction body horror film written, produced, and directed by Canadian director David Cronenberg. It stars Jennifer Jason Leigh and Jude Law. As in Videodrome, Cronenberg gives his psychological statement about how humans react and interact with the technologies that surround them. In this case, the world of video games. András Hámori and Robert Lantos, two of the producers of the film said in an interview that they intentionally hid a pun in ... more on Wikipedia

Existenz IS LISTED ON