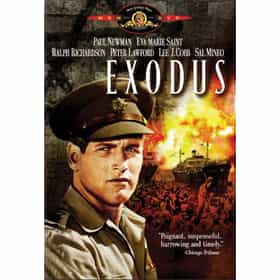 Exodus is a 1960 epic film made by Alpha and Carlyle Productions and distributed by United Artists. Produced and directed by Otto Preminger, the film was based on the 1958 novel Exodus, by Leon Uris. The screenplay was written by Dalton Trumbo. The film features an ensemble cast, and its celebrated soundtrack music was written by Ernest Gold. Widely characterized as a "Zionist epic", the film has been identified by many commentators as having been enormously influential in stimulating Zionism and support for Israel in the United States. ... more on Wikipedia

Exodus is ranked on...

Exodus is also found on...