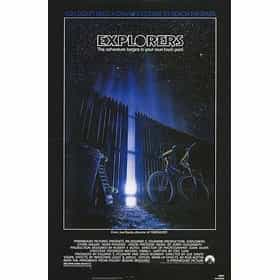 Explorers is a 1985 family-oriented science-fiction fantasy film written by Eric Luke and directed by Joe Dante. The film stars Ethan Hawke and River Phoenix as teenage schoolboys who build a spacecraft to explore outer space. The special effects in the movie were produced by Industrial Light & Magic, with make-up effects by Rob Bottin. Rushed into production, the film was never properly finished. Dante revealed that the studio demanded that he stop editing and rush for a July release where it was overshadowed by the Live Aid concert. Despite being a box office flop upon its release, it attracted a cult following when it was later released on VHS. ... more on Wikipedia

Explorers is ranked on...

Explorers is also found on...