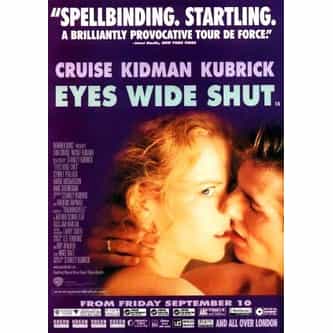 Eyes Wide Shut is a 1999 American thriller film loosely based upon Arthur Schnitzler's 1926 novella Dream Story. The film was directed, produced, and co-written by Stanley Kubrick. It was his last film, as he died six days after showing his final cut to Warner Bros. studios. The story, set in and around New York City, follows the adventures of Dr. Bill Harford, who is shocked when his wife, Alice, reveals that she had contemplated an affair a year earlier. He embarks on a night-long ... more on Wikipedia

Eyes Wide Shut IS LISTED ON