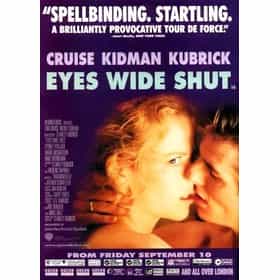 Eyes Wide Shut is a 1999 American thriller film loosely based upon Arthur Schnitzler's 1926 novella Dream Story. The film was directed, produced, and co-written by Stanley Kubrick. It was his last film, as he died six days after showing his final cut to Warner Bros. studios. The story, set in and around New York City, follows the adventures of Dr. Bill Harford, who is shocked when his wife, Alice, reveals that she had contemplated an affair a year earlier. He embarks on a night-long adventure, during which he infiltrates a massive masked event of an unnamed secret society. ... more on Wikipedia

What Happened When Stanley Kubrick Took Over Tom Cruise And Nicole Kidman's Careers For Two Years 38k views In a time where leaks from a film set are commonplace, either from anonymous sources or the Instagram accounts of the stars ...
The Best Eyes Wide Shut Movie Quotes 30 votes The best Eyes Wide Shut quotes make you realize how great the movie really is, even if you haven't seen it in a while. Let's...

Eyes Wide Shut is ranked on...