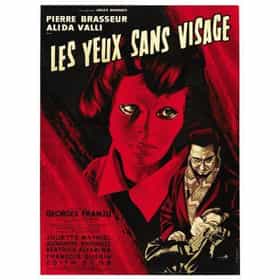 Eyes Without a Face

Eyes Without a Face is a 1960 French-Italian horror film adaptation of Jean Redon's novel, directed by Georges Franju, and starring Pierre Brasseur and Alida Valli. During the film's production, consideration was given to the standards of European censors by setting the right tone, minimizing gore and eliminating the mad-scientist character. Although the film passed through the European censors, the film's release in Europe caused controversy nevertheless. Critical reaction ranged from praise to disgust. The film received an American debut in an edited and dubbed form in 1962 under the title of The Horror Chamber of Dr. Faustus. In the United States, Faustus was released as a double ... more on Wikipedia

Eyes Without a Face is ranked on...

#6 of 15 15 Obscure Horror Movies from the '60s You Need to See Right Now 862 VOTES The 1960s was a great decade for the horror genre. Sixties' horror films pioneered many innovations, such as the introductio...
#6 of 17 Pretty Good Horror Movies That Got A Criterion Release, Ranked 113 VOTES Since it first began releasing classic and contemporary movies from around the world in 1984, the Criterion Collection has b...
#10 of 79 The Best French Movies That Are Absolute Masterpieces 2.4k VOTES Artistic cinematography, romantic stories, and creative directing have made French films a favorite all over the world. The ...
#12 of 69 The Best '60s Horror Movies 5.7k VOTES LSD, Woodstock, JFK, MLK, The Beatles, and the moon landing - the 1960s were quite a decade, and saw the release of some of ...
#40 of 52 The Best Gothic Horror Movies 6.1k VOTES Gothic horror (also commonly referred to as gothic fiction) is a genre of literature or film that typically combines horror,...
#61 of 115 The Best Old Horror Movies 32.2k VOTES The best old horror movies include classic scary films designed to terrify. Early horror movies tapped into our deepest fear...
#191 of 209 The Best Classic Horror Movies 83.1k VOTES If you’re a true horror film enthusiast then you’ll recognize these famous directors and the movies that earned them worldwi...
#17 of 43 The Best Exploitation Movies of the 1970s 1.8k VOTES The best ‘70s exploitation movies are a dizzying blend of graphic sex, sensational violence, and a dash of kitsch. Nazis, fa...
#74 of 75 The Best Horror Movies for Date Night 19k VOTES Are you hoping for the perfect horror movie pick for a night of cuddling? Horror movies can sometimes make the best choice f...
#8 of 36 The Best Horror Movies of 1960 155 VOTES List of the best 1960 horror movies, ranked by how many upvotes they've received by other fans of the genre. All types of sc...
#2 of 12 The Best Horror Movies Set in Paris 29 VOTES With beautiful landmarks like the Eiffel Tower, the Louvre, and the Arc de Triomphe, you probably don't associate the &...

Eyes Without a Face is also found on...