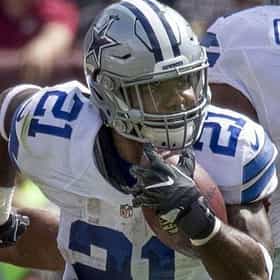 Ezekiel Elijah Elliott (born July 22, 1995) is an American football running back for the Dallas Cowboys of the National Football League (NFL). He played college football at Ohio State, where he earned second-team All-America honors in 2015. He was drafted by the Cowboys fourth overall in the 2016 NFL Draft. In his first NFL season, he led the league in rushing yards and was invited to the Pro Bowl. Elliott was born in Alton, Illinois, to a mother and father who were both athletes in college. His mother, the former Dawn Huff, was a high school state champion in three sports before attending the University of Missouri and running track there. His father, Stacy, was a linebacker for the ... more on Wikipedia

Ezekiel Elliott is ranked on...

Ezekiel Elliott is also found on...