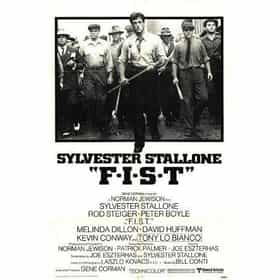 F.I.S.T. is a 1978 film directed by Norman Jewison and starring Sylvester Stallone. Stallone plays Johnny Kovak, a Cleveland warehouse worker who becomes involved in the labor union leadership of the fictional "Federation of Inter-State Truckers". He finds that he must sacrifice his principles as he moves up through the union and attempts to expand its influence. The film is loosely based on the Teamsters union and their former President Jimmy Hoffa. Many well-known actors and actresses appear in F.I.S.T., including Kevin Conway, Brian Dennehy, Rod Steiger, Melinda Dillon, Richard Herd and Peter Boyle. Although the film's title is an acronym for the "Federation of ... more on Wikipedia