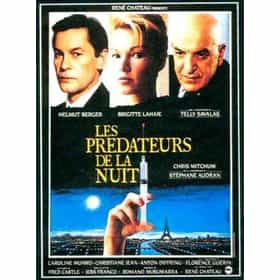 Faceless is a 1988 French slasher film directed by Jesús Franco. The film is about Dr. Flamand and his assistant Nathalie who lure unsuspecting victims to use their skin to perform plastic surgery on the doctor's disfigured sister - a plot reminiscent of Franco's first film, Gritos en la noche. Hallen is a New York businessman who hires private detective Sam Morgan to find his missing fashion model daughter Barbara. Other elements of the story include a Nazi doctor and a chainsaw/power tool tormentor who are called in by Dr. Flamand. This was Savalas' final acting appearance before his death in 1994. ... more on Wikipedia

Faceless is ranked on...

#42 of 56 The Best Telly Savalas Movies 677 VOTES List of the best Telly Savalas movies, ranked best to worst with movie trailers when available. Telly Savalas's highest gros...
#11 of 12 The Best Horror Movies Set in Paris 30 VOTES With beautiful landmarks like the Eiffel Tower, the Louvre, and the Arc de Triomphe, you probably don't associate the &...

Faceless is also found on...