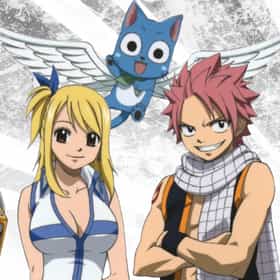 Fairy Tail is a Japanese manga series written and illustrated by Hiro Mashima. It has been published in Weekly Shōnen Magazine since August 2, 2006, and has been published by Kodansha in 48 tankōbon volumes; the individual chapters are being published in tankōbon volumes by Kodansha, with the first released on December 15, 2006, and the 48th volume released on March 17, 2015. Fairy Tail follows the adventures of Lucy Heartfilia, a teenage wizard, who joins the titular wizards' guild and teams up with fellow guild member Natsu Dragneel as he searches for the dragon Igneel. The chapters have been adapted into an anime series produced by A-1 Pictures and Satelight, which began ... more on Wikipedia

Lucy Heartfilia
The Best Fairy Tail Villains of All Time 42.1k votes It's one of the longest running modern anime, but who is the best Fairy Tail villain that you wish you could see more of? Th...
The 20 Best Female Characters In 'Fairy Tail' 32.2k votes One of the coolest aspects about Fairy Tail is its plethora of awesome female characters. Many of the best shonen series foc...
The Best Fairy Tail Fanfiction, Ranked 1.4k votes Do you love Fairy Tail? If so, you might want to expand past canon itself and start exploring what the world of fanfiction h...
The 15 Greatest Fairy Tail Ships 33.9k votes Fairy Tail is a manga with a rich and detailed history. The graphic novel debuted in 2006, and since then, author Hiro Mashi...
The 20 Greatest Flat Chested Anime Girls of All Time 8.4k votes Flat is justice! This is the rallying cry of everyone who appreciates flat chested anime characters. Though many flat cheste...
The Most Powerful Magic in 'Fairy Tail' 3.6k votes Fairy Tail is one of those anime series that really introduces you to a whole new world. With so many different types of mag...
The Best Digimon Fanfiction, Ranked 89 votes Digimon was a first anime for many fans of the genre, and it's been updating with new adventures ever since its original 199...
Every Fairy Tail Opening Theme Ranked Best to Worst 9.9k votes You know that an anime that ran for almost 300 episodes is going to have a ton of intros, so lets rank every Fairy Tail open...

Fairy Tail is ranked on...