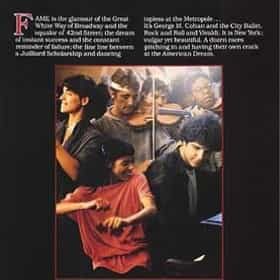 Fame is a 1980 American musical film conceived and produced by David De Silva and directed by Alan Parker. Its screenplay is by Christopher Gore, its choreography by Louis Falco and musical score by Michael Gore. The film follows a group of students through their studies at the New York High School of Performing Arts. The film is split into sections corresponding to auditions, freshman, sophomore, junior and senior years. The film ranked #42 on Entertainment Weekly's 2006 list of the "50 Best High School Movies". The film has spawned a television series and spin-off, a stage musical that has played all over the world since 1988 when it premiered at the Coconut Playhouse in ... more on Wikipedia

Fame is ranked on...

Fame is also found on...

Every Oscar Winning Film Ever Famous Movies Filmed in New York City List of All Movies Released in 1980 Gay Movies: List of All Gay Films List of All Teen Movies