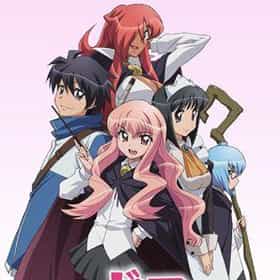 The Familiar of Zero is a fantasy and comedy-oriented series of Japanese light novels written by Noboru Yamaguchi, with illustrations by Eiji Usatsuka. the series was adapted by J.C.Staff into four anime television series and an additional original video animation episode. Louise is a noble girl who is terrible at magic, as her attempts usually result in an explosion. Early in the school year at the Tristain Academy of Magic, the second year students perform a special ritual where they summon their familiar, which serves as their eternal protector and partner, and is usually some sort of magical creature. But Louise summons Saito Hiraga, an ordinary teenage boy from Japan, leaving her ... more on Wikipedia

Familiar of Zero is ranked on...

#576 of 891 The Best Anime Series of All Time 5.7M VOTES You love anime but what tops this list of the best anime series ever made? Top anime series include shows like Death Note, A...
#79 of 318 The Best English Dubbed Anime of All Time 969k VOTES If you're one of those people who only watches anime in Japanese, we don't blame you. English dubs can really ruin a series ...
#199 of 258 The Best Romance Anime Ever Made 817.7k VOTES It's time to get in touch with your emotional side, as we're ranking the top romance anime that has ever been made. These sh...
#8 of 13 The 13 Best Isekai Romance Anime 11.9k VOTES Isekai - a genre in which a character is transported from one world to another, and must get used to life in a completely ne...
#14 of 31 The Best Anime Like KonoSuba 1.5k VOTES Need to find more anime like KonoSuba? After dying a laughable death, Kazuma Satou has been given a chance to be reborn...
#22 of 30 The Best Anime Like Campione! 891 VOTES Need some Campione anime recommendations? Since it's such a unique series, let's rank the best anime like Cam...
#13 of 19 The Best Anime Like Demon King Daimao 1.6k VOTES Also known as Demon King Daimao, the TV anime Ichiban Ushiro No Daimaou adapts the first five volumes of the light nove...
#10 of 19 The Best Anime Like Girls Bravo 172 VOTES Adapted from the shōnen manga series by Mario Kaneda, the anime Girls Bravo tells the story of a shy high school boy who sud...
#20 of 31 The Best Anime Like Chivalry Of A Failed Knight 3.1k VOTES Need some Chivalry Of A Failed Knight anime recommendations? Since it's an extremely popular series, let's rank th...
#5 of 19 The Best Tsundere Anime 2.4k VOTES List of the best tsundere anime, voted on by Ranker's anime community. This may not be the most popular genre of Japanese an...