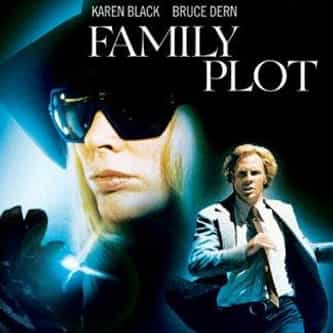 Tagline
There's no body in the family plot.

Family Plot is a 1976 American dark comedy/thriller film that was the final film directed by Alfred Hitchcock. The film was based on Victor Canning's novel The Rainbird Pattern, which Ernest Lehman adapted for the screen. The film stars Karen Black, Bruce Dern, Barbara Harris and William Devane. The film was screened at the 1976 Cannes Film Festival, but was not entered into the main competition. ... more on Wikipedia

Family Plot IS LISTED ON