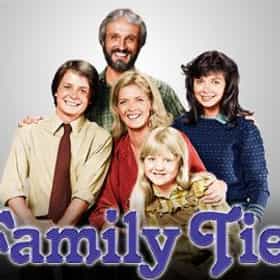 Family Ties is an American sitcom that aired on NBC from September 22, 1982 until May 14, 1989. The series, created by Gary David Goldberg, reflected the move in the United States from the cultural liberalism of the 1960s and 1970s to the conservatism of the 1980s. This was particularly expressed through the relationship between young Republican Alex P. Keaton and his ex-hippie parents, Steven and Elyse Keaton. The show won multiple awards, including three consecutive Emmy Awards for Michael J. Fox as Outstanding Lead Actor in a Comedy Series. ... more on Wikipedia

Family Ties is ranked on...

#103 of 2,297 The Greatest TV Shows Of All Time 1.5M VOTES Choosing the best TV shows of all time means taking into account the best TV dramas, the best TV comedies, the best cartoons...
#66 of 590 People who voted for Family Ties... People Age 30 to 49 are 2x more likely to vote for this The Best TV Theme Songs of All Time 323.7k VOTES The best TV theme songs and TV intros of all time will take you back to some of the greatest moments in TV. Television theme...
#4 of 89 The Best 1980s Primetime TV Shows 17k VOTES The 1980s had some great shows. But, which of the TV shows from the 1980s is the best? That's up to you! Vote up your favori...
#161 of 216 The TV Shows with the Best Writing 68.9k VOTES What are the best written TV shows of all time? The Writers Guild of America (WGA) and TV Guide recently compiled its list o...
#18 of 64 The Best NBC Comedies of All Time 49.4k VOTES The best NBC comedies of all time include classic sitcoms that captivated television audiences for years. This list of the g...
#8 of 33 20+ 1980s Sitcoms That Will Still Make You Laugh 9.1k VOTES From Blair Warner's feathered hair to Julia Sugarbaker's face-swallowing bifocals, from Rose Nylund's St. Olaf stories to De...
#188 of 422 The Best TV Shows to Rewatch 133.5k VOTES List of the best TV shows to rewatch, as ranked by television fans and critics. When the weekend comes around and you can’t ...
#6 of 114 The Best Shows About Families 14.3k VOTES The best shows about families are those sitcoms and family shows that give us a break from our own families and give us a pe...
#41 of 85 The Worst TV Theme Songs 25.9k VOTES List of worst TV theme songs ever, ranked by the people who had to listen to them before every episode. One of the mo...
#151 of 154 The All-Time Greatest TV Pilots 231k VOTES The greatest TV pilots of all-time are single episodes of television that introduced us to what would soon be iconic charact...
#40 of 111 The Best NBC TV Shows of All Time 37k VOTES List of popular NBC shows, ranked from best to worst. This list of the best NBC TV shows, which includes both current and ca...
#22 of 90 The Best TV Sitcoms on Amazon Prime 5.1k VOTES The best streaming Amazon Prime sitcoms feature many of the most memorable TV characters of all time as seen in some great t...
#23 of 40 The Greatest TV Shows About Sisters 789 VOTES What do you think are the best shows about sisters? Many of us have one, but there aren't as many popular TV shows about sis...
#15 of 44 The Best Comedy Shows About Big Families 1.5k VOTES Large families are the perfect subjects to create sitcom gold. The best big family comedy shows feature diverse characters b...
The Most Popular TV Shows Of The 1980s 870 VIEWS The 1980s were defined by excess, extreme fashions, big hair, and changes in political outlooks - all of which were reflecte...
What Was The Most Popular TV Show The Year You Were Born 101.6k VIEWS Television is a big part of our lives. Most people spend a few hours a night sitting in front of their idiot box, and it's e...
#22 of 36 The Greatest TV Shows About Parenting 1.1k VOTES Which TV shows about parenting do you think are best? While there are countless manuals, books, and detailed guides people c...
#10 of 28 The Best Farce TV Shows 426 VOTES Farce televisions shows may lampoon a tired concept or simply feature outlandish, over-the-top scenarios. Popular farce TV s...
#5 of 32 The Best 1980s NBC Comedy Shows 1.1k VOTES These are the best 1980s NBC comedy shows ranked from best to worst by user votes. In the 1980s, the best NBC comedy shows t...

Family Ties is also found on...